A new contrast sensitivity test is on the market, thanks to two New England College of Optometry faculty members. D. Luisa Mayer, PhD, MEd and Barry Kran, OD, FAAO, are faculty at the college as well as part of the clinical team at the NECO Center for Eye Care at the Perkins School for the Blind, of which Dr. Kran is the director.

The Mayer-Kran™ Double-Happy™ Contrast Test (DH CS test), manufactured and marketed by Precision Vision is unique in that it features a simple schematic of a smiling face and is available as both a screening version and full set. It is targeted at patients who cannot read or verbalize the letters or numbers on standard contrast sensitivity tests. The target population includes young children and individuals of all ages with cognitive limitations. 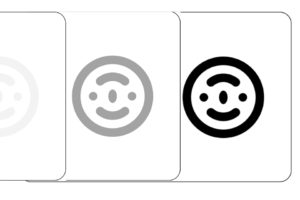 “I’ve long believed that no patient is ‘uncooperative’ or ‘untestable,’” Dr. Kran says. “It’s a matter of providing the right test in the right environment, and of the doctor adjusting the test to make it accessible to that particular patient.”

The DH contrast test consists of cards printed with progressively lighter versions of the smiling face, ranging from “nearly black” to “very dim.” The idea is that the patient will glance at, focus on, or perhaps point to the image, unless its reduced contrast prevents them from seeing it. The dimmest face that the patient detects provides a measure of their contrast sensitivity. The DH image is offset from the center of the test card allowing the image to be presented on the patient’s right or left. The DH image is identical on either right or left, hence its name, “Double Happy.” This property of the test means that the tester is able to use only the patient’s visual responses to judge whether they can detect the DH image.

“We realized that there was no reliable method to assess young patients who had difficulty seeing low contrast objects,” Dr. Mayer says, explaining the motivation behind the test’s creation. “We wanted to design a quick and effective test of contrast sensitivity for the pediatric population that could also be used with older patients, especially those who might not be able to respond to standard tests.”

Dr. Mayer and Dr. Kran developed the test over several years, and have been conducting clinical research regarding the use of DH contrast test with pediatric patients since 2014. They’ve had good results identifying reduced contrast sensitivity, even in children with relatively good visual acuity and full visual fields, where it might typically be missed. The earlier a patient can be accurately evaluated for contrast sensitivity and acuity, the more successful interventional strategies to accommodate their visual impairments can be.

NECO faculty and clinicians continuously strive to improve exams and outcomes for their patients, and Dr. Mayer and Dr. Kran were well-suited to recognize and fill this particular testing gap. Dr. Mayer has done past research on visual field loss and visual acuity in pediatric populations, being awarded several NIH grants to develop alternate testing methods. Dr. Kran’s research focuses on identifying and eliminating barriers to care, and on developing better tools to assess patients who are not well-served by available means.