Alum is proponent of bringing medical aspects of optometry in Switzerland

Throughout her career, Nina Mueller, OD ’09, has sought to play a greater role in her patients’ health care—and elevate the practice of optometry in Switzerland.

“The title ‘OD’ is not well known here, where optometry is a bachelor’s degree with fewer privileges compared to the US,” Dr. Mueller explains. In addition, she says, Swiss optometrists traditionally have been far less involved in patients’ health care compared to ophthalmologists.

That is, until recent changes in national law put optometrists on a more level playing field.

“On February 1, 2020, the change in law, called ‘Gesundheitsberufegesetz’ (translation: Health Professions Act GesBG), went into effect,” Dr. Mueller explains. “Optometry is now officially considered a health profession, with optometrists allowed to use diagnostic drugs, e.g., drops for pupil dilation to evaluate the health of the peripheral retina or anesthetic drops to do contact tonometry or gonioscopy.” 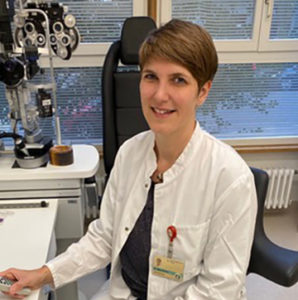 Dr. Mueller has long been a proponent of bringing the medical aspects of optometry to practice in Switzerland. She earned her master’s degree from the MSc Vision Science and Business (Optometry) program at Aalen University in her native Germany, where both NECO and Pacific University College of Optometry contributed to the educational programming.

Dr. Mueller wanted to take her optometric education even further. “I felt like I was missing a key to help me understand the full spectrum of optometry,” she recalls. “Optometry is educated and practiced on the highest international level in the US. I wanted to go to Boston.”

With the support of her employers, Dr. Mueller embarked on NECO’s Advanced Standing International Program (ASIP) in 2007. “I learned so much in Boston and at every single one of my clinical rotations,” she says. “I met so many amazing and interesting people, some of whom are my friends today.”

She graduated NECO in 2009 as a Doctor of Optometry and returned to her job at the University Hospital Basel Eye Clinic. “The hospital created an optometry position for me with the goal of complementing the ophthalmologists’ work,” she says. “Now—an unbelievable 11 years later—my work environment is great. I use the knowledge gained during ASIP on a daily basis.”

As a primary eye-care provider, Dr. Mueller now interfaces with many other medical practices. “I act as the interface between different specialty departments, such as the medical retina department, low-vision specialists, and cataract surgery,” she says. She teaches ophthalmology residents and is “still trying to improve the professional relationships of optometry and ophthalmology.” 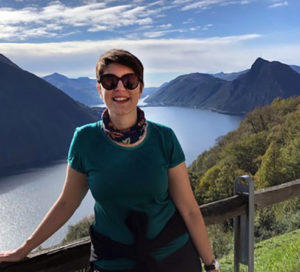 Dr. Mueller stays up to date on research and connects with NECO friends by regularly attending meetings, e.g. the annual meetings of the American Academy of Optometry as well as of other professional associations. Until 2019 she was a NECO adjunct professor in the MSc Vision Science and Business program at Aalen University where she once studied. Currently she’s an active board member with the Swiss Association of Opticians and Optometrists.

Her greatest satisfaction, she says, is playing an important role in her patients’ well-being.

“Experiencing how grateful my patients are when I can help them with a problem that others before me could not, encourages me in the optometry profession—where I’ve been for 20 years,” Dr. Mueller says. “My OD degree from NECO enabled me to work in the way I always dreamed of.”