William Trinh, OD, OAM, practices and teaches in Sydney, Australia, but the impact he has on the optometry field goes far beyond his home country’s borders. He’s on a mission to advance the profession throughout those countries in Southeast Asia where optometry is presently non-existent or underdeveloped.

As the current chairman and long-time member of Australian Health Humanitarian Aid (AHHA), a non-profit charity that provides free eye, dental, and medical care at home and abroad, Dr. Trinh sees firsthand the consequences of the lack of optometric care in underprivileged communities.

Dr. Trinh advocated for the formal establishment of professional optometry in Vietnam, and a collaboration between the Brien Holden Vision Institute and Ho Chi Minh City Eye Hospital resulted in Vietnam’s first optometry school in 2015. A second school soon followed in Hanoi. A similar initiative is currently underway in Cambodia. 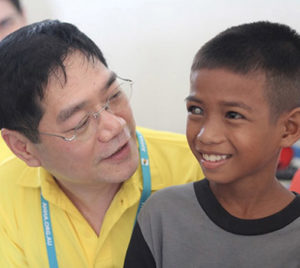 Dr. Trinh offers interesting insights into how government and AHHA trips to Vietnam and Cambodia included education and training for local practitioners, but more was needed. Medical officials in Vietnam became convinced that optometry was a worthy investment. Countries without optometry rely on ophthalmologists and opticians (who often use auto-refractors) to provide for all eye care needs. And vision-saving surgeries, such as those for cataracts and glaucoma, are performed primarily on elderly—usually poorer—patients, leaving hospitals habitually short of funds.

The growing popularity of refractive surgeries among younger, more affluent portions of the population made hospitals realize that such elective procedures could provide a consistent stream of revenue to subsidize other necessary surgeries and keep hospitals open. The challenge? A lack of qualified clinicians who could provide surgeons with accurate refractive results and pre- and post-surgical care. Dr. Trinh and AHHA’s work helped demonstrate that optometry was the crucial missing piece of a comprehensive eye care team.

Dr. Trinh’s advocacy began closer to home, with lobbying to pass the ocular therapeutics legislation in Australia that went into effect in the state of Victoria in 2000, and most other states and territories over the following decade. Faculty from NECO were invaluable in preparing Australian optometrists for lobbying for these changes, according to Dr. Trinh. “I really appreciate the foresight NECO had in helping the international community expand optometry,” he says. 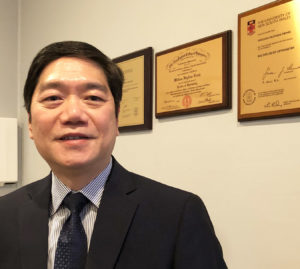 Dr. Trinh was recently awarded the Medal of the Order of Australia for his humanitarian service.

Hospital-based rotations were not available in Australia early in Dr. Trinh’s career, leading him to NECO for greater exposure to full-scope optometry. He received his Doctor of Optometry degree from the U.S. through the college’s Advanced Standing International Program (ASIP) in 2003. “I wanted to expand my knowledge and skill in eye disease management,” he says. “I wanted to learn as much as possible about how things worked there, and then come back to Australia and improve things here.”

Rotations at Lahey Clinic, a VA Medical Center, and a community clinic in Dorchester taught Dr. Trinh the importance of considering systemic and chronic diseases when treating patients. “The way I looked at the patient was completely different when I came back with that knowledge,” he says. “It opened my eyes to seeing the patient as a whole person.”

He also saw how effective the collaboration between ODs and MDs could be, something missing in Australia at the time. “Especially in public hospitals, MDs can’t afford to do primary eye care—both in terms of budgeting and human resources,” he points out. His advocacy is geared toward establishing “that optometrists are healthcare providers, and that dedicating primary eye care to optometrists makes sense.”

Dr. Trinh was recently awarded the Medal of the Order of Australia (OAM) in the 2020 Queen’s Birthday Honours List, for his service to international humanitarian medical programs and to optometry. His charity work is in addition to running a private practice, Wills Eyecare, where he hosts a fourth-year rotation for students from the School of Optometry at the University of New South Wales. He also serves as a visiting lecturer and clinical supervisor at the school.