New England College of Optometry (NECO) celebrated its 125th commencement at Boston Symphony Hall on May 19, 2019. 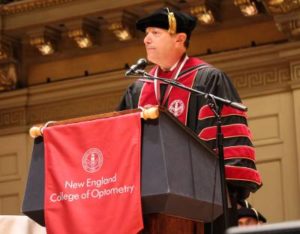 Drs. Jane Gwiazda and Stacy Lyons served as faculty and student marshalls and led the processionals. In attendance were the New England College of Optometry faculty, staff, senior leadership, Board of Trustees members, and alumni board members. Additionally, two members of the fiftieth anniversary Class of 1969 were in able to attend.

Reverend Nancy S. Taylor, senior minister and Chief Executive Officer of Old South Church provided the Invocation and Benediction for the fifth year, providing witty optometric rhymes and metaphors and setting the tone for the joyous day. President Howard Purcell, OD ’84 welcomed the Class of 2019 and introduced the faculty, staff, Board Members and special guests in attendance. His remarks were followed by a welcome by Board Chair Pano Yeracaris, Gary Chu, OD ’95, Vice President of Professional Affairs, and Linda Bennett, OD ’80, President of the Alumni Association. 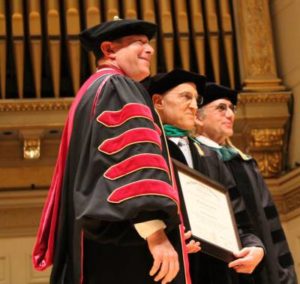 President Howard Purcell, Dr. Mitchell Scheiman, and Dr. Pano Yeracaris Dr. Mitchell Scheiman, OD, FAAO was awarded an Honorary Degree in Ocular Science for his lifetime achievements. Erik Weissberg, OD, FAAO, VP and Dean of Academic of Affairs introduced Dr. Scheiman, noting, “His textbooks created the bedrock that I and countless other students would build our knowledge of binocular vision on…. He is something that gets the job done well, time and time again and is… such a wonderful role model for all of us.” 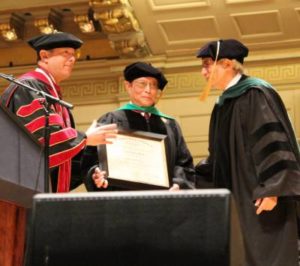 Past President Clifford Scott, OD’68, MPH introduced the second honorary degree recipient, Dr. Guang-Ji Wang, OD ‘92. Dr. Wang has been instrumental in helping to set up optometric education programs in China and creating a strong relationship between NECO and Wenzhou Medical University (WMU). After receiving a medical degree in China, Dr. Wang came to Harvard’s Schepens Eye Research Institute in 1981 to study retinal laser application He brought his learning back to WMU and began to teach, do research, and practice ophthalmology. Eventually, he decided to help to establish optometric education to China at WMU with colleague Dr. Qu Jia. President Scott noted, “Dr. Wang is recognized as the linchpin of the New England College of Optometry’s long-standing partnership with Wenzhou Medical University where he was chair of the ophthalmology department. Last October, he was honored at the gala event celebrating WMU’s sixtieth anniversary. It is equally fitting that he is awarded this accolade by his optometric alma mater.” 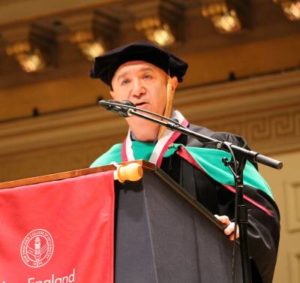 President Purcell noted, “Dr. Alan Glazier, a 1993 NECO alum, is the founder and visionary behind ODs on Facebook and ODsOnFB.com, the eye care industry’s largest and most highly engaged eye care organization online OR off, with over 37,500 members. ODs on Facebook is an inclusive community …a place where everyone can share clinical, practice management and industry information freely and at no ones expense…He also is the founder of Shady Grove Eye and Vision Care, a medical model independent practice serving the Maryland suburbs of Washington, DC….Additionally, he is a partner and business development executive in Total Eye Care Partners, enabling Optometrists with mature practices a medical model legacy exit.” Dr. Glazier talked about his optometric career path and shared advice with the Class of 2019, encouraging them to enjoy their careers, embrace changes that happen in the field of optometry, and to be open to opportunities that present themselves.

This year, for the first time, a Presidential Medal of Courage was presented to student Paul Hicks. After facing adversity during the past few years, Paul was unable to attend the ceremony but sent a message to the community: “Have no fear.” He went on to note that (salutatorian) Victoria Gagnon helped me a lot preventing all fear.” 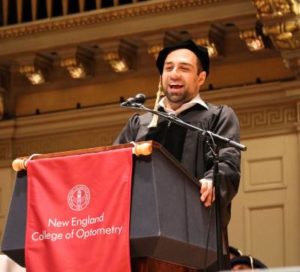 Hamdee Houcheimi, Class of 2019 provided the valedictory remarks. As valedictorian, he received the highest grade point average for classroom, lab, and clinical education. Dr. Houcheimi graduated from the University of Alberta with a Bachelor of Science degree with a specialization in Biochemistry. He began a PhD program in Chemical Biology and worked on cancer morphology and drugs. After a little over a year, he decided to leave lab work and pursue a career that allowed him to make an impact more quickly and soon settled on optometry. Throughout his studies, he has excelled in his academic and clinical work. Additionally, his own family grew to include a new son and a daughter, who were in attendance today. After graduation, Dr. Houcheimi plans to return to Edmonton Alberta and open a private practice.

Class of 2019 Hooding and Diplomas

Before the conferring of degrees, President Purcell acknowledged the students who had served on the Student Council, as well as those who received awards for clinical, personal achievement, academic, and scholarship. Candidates were hooded by NECO faculty members and award recipients William Sleight, OD ’82 (Foster Namias Award) and Bina Patel, OD (Caroll Martus Award) as Dean of Academic Resources and Administration Sandra Mohr read the names. President Purcell was assisted by Class of 2020 Student Class President Monica Luo in the Conferral of Degrees. Trustee Kelly MacDonald, OD ‘01 then led the new Doctors in the Optometric Oath and Reverend Nancy S. Taylor led the benediction.

Class of 2019 Awards and Achievements